Carbon globules with fullerenes were found in Karelian shungite

Shungite rocks are natural composite: equal distribution of highly-dispersive crystalline silicate particles in amorphous carbon matrix. It is carbon with a certain structure that gives it special properties. What distinguishes shungite from other rocks of similar age (according to the scientists, shungite is approximately 2-3 billion years old) is the fact that it contains a considerable amount of metamorphosed substance. Its composition is similar to that of graphite and diamond: it is the third allotropic form of carbon on Earth.

Hardness on mineralogical scale is 4-4,5; density is between 2.2-2.6 metric tons per 1 cubic meter. It has a good resistance to chemicals, low temperatures, and abrasion.

Shungite is mineral with no analogues when it comes to both universal qualities and uniqueness of properties. This natural rock contains almost all elements of Mendeleev periodic table. The most fascinating property of the rock is that once it is put into water, it will let out only the elements that are necessary and good for living organisms. Moreover, natural structures and complex of minerals are similar in its content to enzymes of living cells, so some experts assume that life could have appeared in shungite water. Perhaps this is an explanation to why shungite can clean, help heal and recover, protect, and restore all living things.

It is called “the stone of clean water” because it is a great absorbent with a wide range of actions. It can clean water, biological liquids, non-water solvents (spirits, oils), and even gases from pesticides, biological toxins, hard metals, and radionuclides. Interacting with moisture, shungite has a unique ability to cure diseases. Its healing qualities are truly fascinating. Scientists, who studied shungite, could not hide their astonishment: rocks containing shungite kill and engulf everything that harms living organisms, while concentrate and let out everything that is good for them.

At the end of 20th century, scientists were able to partially explain healing properties of shungite. This mineral mainly consists of carbon, a significant part of which is represented by fullerenes, molecules of a spherical shape. Fullerenes are special form of carbon that was discovered in scientific laboratories while attempting to simulate the processes happening in space; it was later found in Earth’s crust. To highlight the importance of this discovery, it is worth noting that scientists, who were involved in the study, received Noble Prize in chemistry. They are: professor Robert F. Kerl, professor Sir Harold Kroto, and professor Richard E. Smolly.

To understand the nature of shungite, it is best to look closely at properties of fullerenes. Up until recent time, it was assumed that carbon has two allotropic forms of existence: diamond and graphite. These substances differ in composition of crystal matrix and chemical and physical properties. Studies of Karelian scientists showed that shungite carbon cannot be graphitized and is the third allotropic form of carbon that is similar in structure and properties to fullerenes.

Every atom of carbon in the structure of diamond is located in the center of tetrahedron, the peak of which is the four closest atoms. This structure determines diamond as the hardest stone on Earth. Atoms of carbon of a crystalline structure of graphite form six-edge rings that, in their turn, make up a strong and stable net that reminds of combs. The nets are located one above the other in layers that are barely connected. This structure determines specific properties of graphite: low firmness and ability to easily dissect into tiny flakes.

The molecule of fullerene, however, has a spherical surface formed by hexagons and pentagons. The nature determined a strict sequence: every hexagon borders with 3 hexagons and 3 pentagons, while every pentagon borders solely with hexagons. Carbon atoms that form a sphere are strongly bonded. 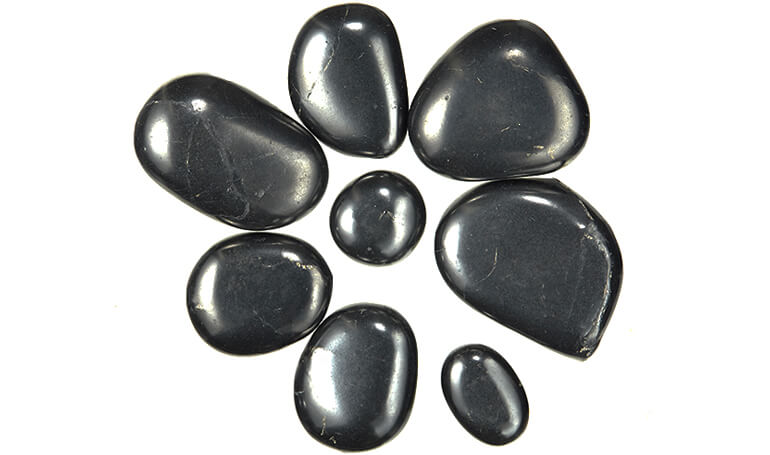 Due to its spherical structure, fullerenes are perfect lubricant. Being the size of the molecules, they roll between the rubbing surfaces. Fantastic materials can be constructed by combining different atoms and molecules inside carbon balls. Fullerenes can be used in medicine, rocket construction, electronics, optoelectronics, and other high-tech production. In all previously listed spheres, working settings of machinery and its quality significantly increase, while technologies become simpler and more effective.

For instance, scientists from one of the universities in Sweden, during the experiments with fullerenes, unexpectedly discovered layered material that reminded them of a foil layered in thin pieces. Transparent and flexible material found was magnet; it saved its qualities even at a temperature of over 200 degrees Celsius. It can be used in creating computer memory by writing with laser. This way it is possible to reach a high level of density of data carriers.

There were high expectations for shungite use in medicine. Scientists expect that due to an almost ideal spherical structure of fullerenes and its tiny size (diameter is 0,7 nm), these molecules will become a mechanical obstacle to viruses trying to get into the cells of an infected organism. Scientists also discuss a possibility of creating medicine against cancer that would be based on water-soluble formations of fullerenes with implemented radioactive isotopes. Administering such medicaments into the tissues would allow to control the influence on infected cells, preventing them from spreading. Nowadays, the main obstacle to development of these medicaments is a high price of artificial isotopes. The price of 1 gram of fullerenes of the highest quality costs 900 US dollars, while a lower quality is around 40 US dollars, depending on the purity of fullerenes.

These shortcomings of artificial fullerenes redeem those of natural: shungite carbon.

< Previous article
Back to list
Next article >
Other articles
Shungite is a nanostructured natural compound
Read more >
Shungite rocks: 50 years of scientific technological research in the Institute of Geology
Read more >
Karelian shungite is a unique and effective feed additive to the diet of ruminant animals
Read more >